We’ve all heard of this equation, but what does it mean? Mass-energy equivalence basically means energy and matter are interchangeable; matter can be converted into energy, and energy can be converted into matter. It’s a consequence of special relativity, a subset of Einstein’s theory of relativity. We see and utilize this equation in everyday life. For example, radioactivity is the emission of energetic particles from unstable atomic nuclei. Mass (atomic nuclei) is being transformed into energy (radiation). Similarly, in nuclear fission (the splitting of atomic nuclei) energy is released through particles and electromagnetic radiation. In nuclear fusion (the fusing of atomic nuclei), the missing mass of the fused nuclei is converted to photons.

Another trippy consequence of special relativity is time dilation, which means time passes by more slowly in moving frames than in a stationary frame of reference. For example, let’s say I’m on a train, and you’re standing on the ground. Time is flowing at a slower rate for me than for you. In other words, you’re getting older faster than I am. Of course, in this example the difference is so minute that it’s insignificant. But it would be significant at relativistic speeds (speeds which are a significant fraction of the speed of light). Take the Twins Paradox for example. Imagine there’s a set of twins and that the more adventurous one decides to travel in outer space at 0.86c (86% of the speed of light). The space twin will age at half the speed as the Earth twin. So if the Earth twin ages 10 years, the space twin will only age 5 years. Cool beans.

Relativity of Simultaneity: Simultaneous events are not absolute, but dependent on the observer’s reference frame. Let’s say I’m on a train moving at a relativistic speed and I see two bolts of lightning strike both ends of the passenger car at the exact same time. However, if you were standing on the ground observing these events, you would see the two bolts of lightning striking the passenger car non-simultaneously. We can observe the exact same events, but see them occur in a different sequence… Mind boggling…

Length Contraction: Lengths of objects in moving frames contract when measured by observers in a stationary frame of reference. Let’s say you measured a ladder and it was 200 feet long. Then let’s say the ladder was placed inside a train moving at 0.86c. If you were to remain in the inertial frame of reference and measure the ladder again, you would discover the length of the ladder contracted to 100 feet.

Relativity of Mass: The mass of a moving object will be greater than its rest mass. Mass increases with velocity and its measurement depends on the reference frame from which the body is being observed. For example, at 0.86c, a body’s mass will be twice its rest mass.

In conclusion, everything is relative: mass, length, momentum, kinetic energy, sequence, even time…

The main purpose of this post is to share a simple proof of E = mc2. All you need to know is basic algebra and the Fundamental Theorem of Calculus (how to integrate/differentiate). It’s pretty cool. There are multiple ways you can prove E = mc2. This is just one of the ways.

The Second Postulate: “Light propagates through empty space with a speed c which is independent of the speed of the source or the observer.”

Step 2. Assuming the postulates of special relativity, demonstrate with an example that the measurement of time depends on the reference frame. Discover the Lorentz factor. (Shown at the end of the proof).

Step 3. Assuming the postulates of special relativity, demonstrate with an example that the measurement of mass depends on the reference frame. Discover the Lorentz factor (Shown at the end of the proof).

Demonstrate the Measurement of Time is Relative

Demonstrate the Measurement of Mass is Relative 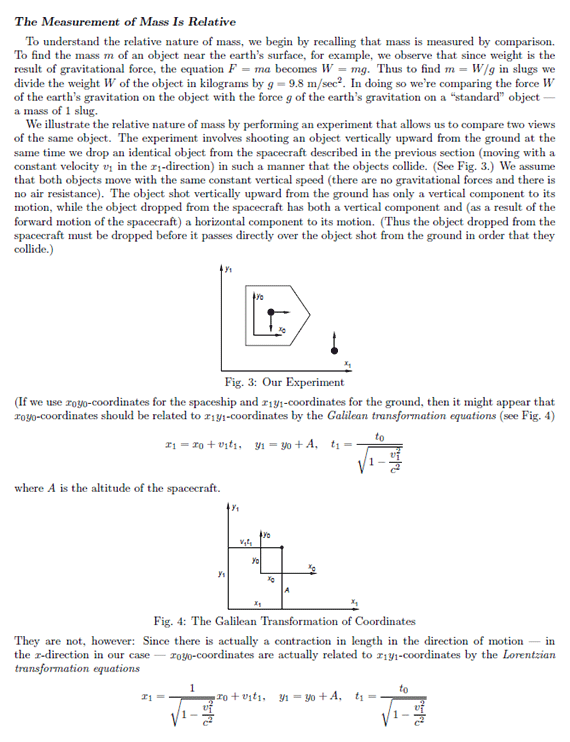 they are all gone into the world of dramas

This work by Arevolvingwheel is licensed under a Creative Commons Attribution-NonCommercial-ShareAlike 3.0 Unported License.