You really shouldn’t watch dramas at two in the morning. You’re in this hyper awake state and your emotions are more volatile. In the quiet darkness, bathed in the glow of your ipad, everything seems a little surreal and unbalanced. And the bittersweet ending of a drama affects you more than it should. And you end up writing a review fueled by the leftover highs of those emotions.

The KBS drama special, When Roses Last Bloomed, is vastly different from what I expected, which was something more maudlin and melodramatic. Instead, it has the feel of an introspective indie film. Despite its melodramatic material, the drama’s modus operandi is slice-of-life. It quietly highlights the mundane and is wonderfully slow paced. The music is minimal, the editing seamless, and the camera distanced, but not detached. And, for the most part, it keeps its grace until the end, though the quality of the writing drops.

WATCH THIS!! Just watch it. Plus, you’ll love the song. I guarantee it.

Premise: A married woman with a terminal illness and a college student meet in a hospital and fall in love in a matter of days.

The drama’s Achilles’ heel is the writing. Two characters feeling the desire or temptation to have a romance with someone they have an inexplicable connection with doesn’t require suspension of disbelief. However, the drama’s legitimization of this romance isn’t convincing and lackluster at best. The viewer is supposed to accept that a woman would go against social mores and choose to abandon her husband and young son for a much younger man whom she’s only known for days. Similarly, the viewer is supposed to accept that a man in his late teens or early twenties would drop out of college to take care of a dying woman whom he’s only known for days. Even if I cut the drama some slack for the flimsy development of the two characters’ relationship by taking into account its time constraints (running time is 71 minutes), the drama also glosses over the morality and consequences of extramarital affairs. There is a confrontation, but it ends rather limply with the husband resigning himself. If more weight and gravity were placed on the consequences of defying society and conventions, the drama’s message would have been stronger. Also, the fact that Jeong Hyeok’s (Lee Jong Suk) character never feels conflicted significantly reduces the depth of his character.

One of the writing’s strong points, however, is its use of metaphors and symbolism. Some of the metaphors are heavy-handed, such as Jeong Hyeok fixing a toy dog, an analogy for fixing Shin Ae’s (Jeon Ik Ryeong) heart, but others, though simple, are resonant. One example would be a scene in which Shin Ae traps a moth under her hand on a window. The scene opens with a shot of beautiful blue skies and skyscrapers, but then the camera steps back to reveal Shin Ae is gazing at the sky from behind a glass window. Like the moth trapped under hand, she’s also trapped behind the walls of the hospital. This symbolizes how Shin Hye is trapped by her physical illness, feelings of guilt toward her husband, the expectations of her husband, and being treated as an invalid. Another memorable scene is when Shin Ae stands naked in the dark, in front of a projection of her CT scans. It’s a raw scene in which she approaches and identifies with her illness, and contemplates death.

Initially, I thought that the theme of this drama was that people are the prettiest when they are loved. This assumption was based on the scene in which Shin Ae recalls the time her mother abandoned her. Everyday she waited for her mother to return at a field of flowers, but it was her grandmother who came to pick her up. She stops crying when her grandmother tells her, “Why are you crying? Even these flowers in full bloom aren’t as pretty as you.”

However, based on other scenes, I now think that the predominant theme is that people are the prettiest when they are independent and pursue personal freedom. This drama has a feminist slant in that Shin Ae at one point decides to divorce her husband and abandon her son, which would normally be considered condemnable behavior in Confucian-value-steeped Korea. To explore this issue a little further, in earlier scenes, we see that Shin Ae can’t fulfill her duties as a wife and mother because of her illness. In Korea, wives are supposed to be the backbone of support for their husbands (내조, 內助), but in a role reversal, her husband not only raises their child, but he also supports her. Stripped of her roles, she has no purpose in life. She has no answer when Jeong Hyeok asks her, “But what are you going to do before you die? Besides wearing hospital clothes and fixing toys.”

She’s not only trapped by her illness, but also by her feelings of guilt toward her son and husband, the expectations of her husband, and her husband’s denial of her autonomy. In return for his support, her husband expects her gratitude and obedience. Her husband makes all the decisions: when she goes to the hospital, when her treatment starts, etc. Not only that, but he also relegates a role and identity for her. Shin Ae’s delegated role and identity is “the patient.”

In contrast, Jeong Hyeok sees Shin Ae as a woman, not a patient. He’s a rather one-dimensional character, but he does listen to her and challenge her to defy conventions.

Shin Ae: Let’s divorce. Do you know why? Whether as a crazy bitch, or bitch that deserves to die, I feel like that’s living, rather than waiting for death.
Eui Su: Do you think you’ll have time for that?
Shin Ae: Eui Su, I –
Eui Su: Stop talking. So have you slept with him?
Shin Ae: I want to.
Eui Su: How can you do this to me? I won’t divorce you. I’m going to keep you by my side.  Feel sorry until you die.
Shin Ae: No. I won’t be your side any longer.
Eui Su: Why the hell not?
Shin Ae: Because to you, until I die, I’m a patient.
Eui Su (to Jeong Hyeok): What do you gain from fooling around with a sick woman?
Jeong Hyeok: She’s not a sick woman. She’s a woman.

Lee Jong Suk’s acting has dramatically improved since his Secret Garden days, or at least based on the Lee Jong Suk SeGa cuts I’ve seen on youtube. Though he lacks technique, he benefits a lot from his low, gentle voice and endearing mannerisms. Unfortunately, he has the same tone and inflection in every scene he’s in. His facial expressions tend to be stiff, and his gaze rather blank. To his credit, there is one quiet moment when glimmers of real emotions surface. It’s the scene in which he crouches on the sidewalk, crying, after he realizes Shin Ae has left him. I think it goes to show that with good directing, Lee Jong Suk can reign in his over-the-top acting tendencies. Tangent: let me just complain about his styling for a sec. I hate his haircut, hair color, Bermuda shorts and gingham shirts. (People, I am the biggest Lee Jong Suk fan girl, so don’t torch me).

Look at those eyes!!! Jeon Ik Ryeong is so frickin’ gorgeous. *fangirling*

The lovely Jun Ik Ryeong was the one who carried this drama. She gave her character depth and dimension; she was at times cheerful, heartbroken, wry, conflicted, vulnerable, and above all, poised. Her most memorable scene is when she lashes out against Jeong Hyeok’s ex-girlfriends’ malicious words with gritted teeth, smarting eyes, and brimming anger.

I’m surprised by how artistic and mature KBS drama specials are in comparison to daily dramas or prime-time dramas. Drama specials, both in style and substance, are more like films. I had seen White Christmas and Kyung Sook’s Father, both of which I loved, but I never considered the fact that these weekly drama specials could be of consistent high quality. I will definitely be watching more drama specials in the future.

Check out more screen caps here. Some shots actually remind me of Kim Yong Soo’s in White Christmas. I noticed a lot of details by looking at the screen caps, such as the motifs of mirrors, flowers, and churches (Example: In one frame, a church is shown in the reflection of a puddle). Also, at the beginning and end of the drama, both Shin Ae and Jeong Hyeok are wearing salmon pink.

Bonus puppy gif. A reward for reading this wall of text

I streamed this raw, so I have no idea if these links work.

1 thought on “Kdrama Review: When I Was the Prettiest”

they are all gone into the world of dramas 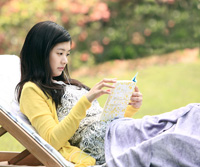 This work by Arevolvingwheel is licensed under a Creative Commons Attribution-NonCommercial-ShareAlike 3.0 Unported License.